The LinkRunner AT (LRAT) provides a variety of cable test techniques including TDR, wiremapping, office identification, and toning. It is designed to assist in troubleshooting cabling problems, such as excessive cable runs or cables broken at the wall plate or patch panel. The LRAT uses a combination of TDR and resistance measurements to map wires, measure cable length, and identify anomalies, such as shorts, opens, and split pairs. The LRAT does not perform cable certification.

Unexpected Behavior? If you are experiencing unexpected behavior with any of the results below, please follow the instructions at the bottom of this article to re-calibrate your unit. 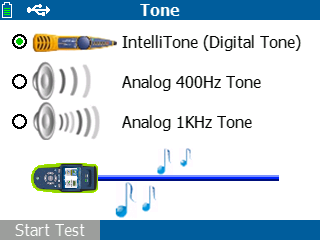 * IntelliTone is a registered trademark of Fluke Networks.


Determining Cable Wiremap and Length
The LRAT can be used to test terminated cables (connected to the internal Wire Mapping Port (WMAP) or an external WireView Cable ID accessory) or unterminated (open) cables.

LRAT can measure accurate length for cables of approximately 300 ft (100 m) or less, with an accuracy of plus or minus 6.56 ft (2 m). LRAT may be able to measure cables up to 500 ft (150 m) with relative accuracy. The minimum cable length is 2.6 ft (0.8 m) for an accurate cable test. For both terminated and unterminated cables, fault detection is also accurate to within a 2.6-ft (0.8-m) distance to the fault.

Length is shown for each pair. In some cases, one pair length might measure as longer than another pair, due to the pair twist rates.

NOTE: LRAT cannot perform a cable test on a cable that is connected to a switch.

1. Terminated at the built-in Wire Mapping Port (WMAP) on your LRAT (bottom left side of the unit)

With a terminated cable test, you can identify the following:

Using an un-terminated/open cable test you can identify the following:

If your LRAT is showing a crossed pair or a different Wireview than expected, the unit might have lost its calibration settings. This can easily be remedied by the following procedure: